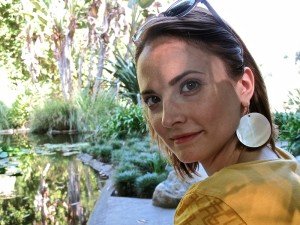 After a blistering heatwave in which you had to walk to your car holding a survival water bottle, Angelenos enjoyed the first nice weekend this fall. I headed outside sans SPF 90 sunscreen and headed for… the desert. Then a jungle. Then a bucolic English rose garden.

And the only place in Los Angeles you can experience such a diversity of flora is at the world famous Huntington Library. I spent most of my excursion outside the hallowed walls of the library itself and were greeted by a cadre of butterflies–monarchs, swallowtails, and little orange ones I’d never seen but who appeared to have two sets of wings. 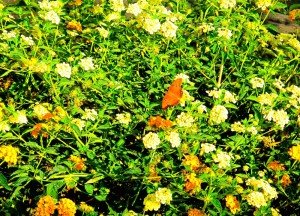 Sadly, I was unable to capture a great photo of this joyous sight, save this one shot. Think back to your school days of Where’s Waldo, and enjoy finding the little fella in here.

Next I headed to my favorite part of the Huntington–the desert. As a Colorado native, I have a soft spot for succulents and cacti, so I enjoyed taking in acres of plants from across the Americas in near perfect solitude. The winding paths and carefully arranged color sprays show the hand of the curator, but if you look through the desert to the San Gabriel mountains, you’ll soon forget you’re walking on pavement. 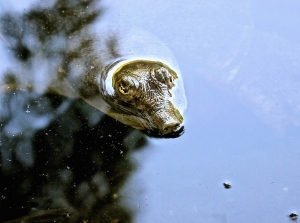 Over at the waterfall fed lily ponds, I came face to face with a softshell turtle who was as curious about me as I was about him. A group of people were teasing the koi by pretending to feed them and instead attempting to “pet” them as they passed by open mouthed, disappointed that what the tourists were throwing were merely petals.

Determined to see as much as we could in the remaining 45 minutes the Huntington was open, I trekked through the jungle and found the tree which must have inspired Guardians of the Galaxy‘s Groot. With twenty minutes ’til closing, I boogied through the rose garden and into the Virginia Steele Scott Gallery. 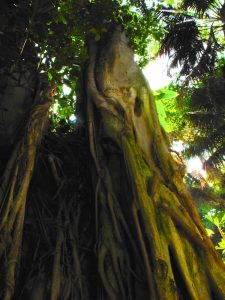 And here comes the moment of serendipity. Yesterday marked the beginning of the 2014 AxS Festival in Pasadena. AxS (pronounced “axis”) is a two-week citywide festival produced by the Pasadena Arts Council that explores the nexus of art and science and the curiosity which drives them both. One of the featured paintings in the Steel is Frederic Edwin Church’s majestic (and newly reframed) Chimborazo.

Although a bit magical in the actual view of jungle, desert, and peaks, the placard beside the landscape notes that the detail in the foreground is so specific that botanists today can identify individual species growing in that particular Ecuadorean region in the mid-ninteenth century. Let’s call it daguerreotype realism.

The lush array of environments in the painting parallel the Huntington itself–the sweeping scale of man to mountain, the exemplar craftsmanship of art and literature, and the scientific inquiry housed in that same institution. I may not have been at a sanctioned AxS event, but I was certainly seeing its manifesto in action.